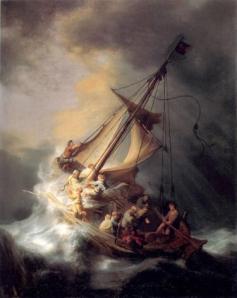 The Storm on the Sea of Galilee, Rembrandt, 1633 (or possibly, the Bowen Island ferry).

Earlier this year, I attended an EAC-BC stylistic-editing seminar. I enjoyed the writing exercises, especially one requiring each of us to write a press release announcing that the next sailing of the Bowen Island ferry would be cancelled due to bad weather. We were given several styles to choose from, including that of Jane Austen and the King James Bible. I chose King James …

CHAPTER I
A message comes down from on High to the waiting hordes, &c.

AND an Herald came down from on High to the fearful crowds, assembled by the boats on the shore of the Salish Sea.

2 O ye of little faith! saith the Herald. Ye, who dwelleth in the dank wildernesses of Bowen Island, who yearn to see the nether reaches of the Salish Sea: hearken now unto the voice of those who go down to the sea in ships and occupy their business in great waters!

3 Behold, as this day dawned, there arose a great tempest, insomuch that the ships were covered with waves: and the sea captains were sore afraid.

4 But the wind abateth not.

5 The wind bloweth where it listeth, and they who prophesy about such things hear the sound thereof but cannot tell whence it cometh, nor whither it goeth.

6 It is enough, saith He: we have given up the ghost: verily, the peoples that live in the Land of Cristy shall not set forth upon the seas this day.

7 We do earnestly repent and are heartily sorry, quoth the Herald.

8 And there was weeping and gnashing of teeth.